What is the Dakshina Moorty 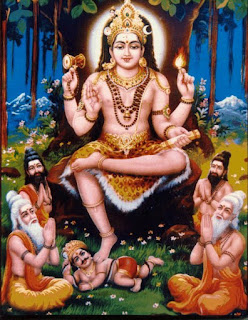 
"The first thing that must be understood is the exact meaning of Dakshina."

"In the Dakshina Moorty Upanishad, the meaning of Dakshina is given in the following manner:
That buddhi or intellect, which is the tattwa (the true principle), jnana (the true knowledge), and rupini, (one who assumes all the forms in the universe) and shines due to the light of Brahma, is Dakshina."

" She is the mouth of, or the entrance into, the manifestation of the Divine Principle."

"The proponents of Brahma (the Absolute, the self-existent spirit) call it Dakshinamukh Shiva."

"This means that Dakshinamukh is not a combination of the words Dakshin and aamukh (facing south) but Dakshina and much (mouth or door)."

"Generally it is interpreted to mean Dakshinaamukh, that is, facing south!.
" But, according to the Upanishad, it is the Shakti (divine Power) of the soul, because the intellect is also the activity of this Shakti that reflects the knowing aspect (the giver of knowledge) of the soul upon the chitta (mind stuff,psyvhe)."

"The Lord is also the essence of Shakti, and hence the Lord himself is called Dakshina Moorty. He is the Guru, he is the goal, and he is also the means of achieving it."

"Mind is regarded by the Indian Divine Saints as made up of a very fine substance even finer than 'ETHER' known as 'CHITTAKASHA'."

"The Social Conductivity,Religiosity & Spirituality are the NAME of that FORCE which Detaches Individual Beings from the Effects ,Changes and Waves in the World, the body & the Chitta."

"The Chitta (mind stuff,psyche) ,just like the body and the world,is also a part of NATURE."

"For the Gentleman, True Individual Beings, Aspirant, Devotee & Saints the Entire World is their "HOME i.e. Mandir, Majid, Girjaghar(Church), Guru Dwara & so forth."."

"All the human beings are the CITIZEN of World & CHILDREN of ONE CONSCIENTIOUSNESS i.e. ONLY ONE LORD."

"Therefore we bound to Create & Manifest HOMOLOGOUS Divine Energy of "ALMIGHTY CONSCIOUSNESS" to over come "THE GLOBAL WARMING."."

"The Consciousness of the LORD Shiva Shiva the Destroyer
"The automatic activates of SHAKTI(Divine Power) manifest power that creates,OPERATE & Destroy the Living & N0n-Living of ANNANTA{Infinite) (UNIVERSE)

"The word Shiva translates as the "Auspicious One" and he is the most revered Hindu Deity."

" He is both the Destroyer and the Creator bring rejuvenation to the Universe."

" Shiva(Lord) worship rose up around 2 BCE. Shiv is one of three deities in Hinduism that illustrate the three aspects of Divine Nature: Shiva (Destroyer), Vishu (Preserver) and Brahma (Creator) (G.O.D.)."

"Shiva is often pictured in peaceful meditation or in the midst of him firey dance (Nataraj). He is also represented by the symbol Lingam. All of these forms of Shiva will be reviewed in this lens."

"The Animals, Weapons and Symbols of Shiva."

"Images of the Lord Shiva are filled with animals and symbols, but what do they all divine mean?"

"Snakes: Represent Kundalini energy which is often presented as an image of a snake at the back of the spine or root chakra."

" Double-sided Drum (DAMRU): Represents the creativity of the Universe and the uniting of male-female energy divinty"

"Trident: This weapon represents his reign over illusion in all three planes of existence: spiritual, subtle and physical."

" Crescent Moon: The waxing and waning of the moon represent the cycles of creation, death and rebirth."

"What the heck is shooting from his head?? It is a stream of water from the holy river Ganges."

"Lord Nataraj"
"Also Known as The Divine Dancing Shiva with His SHAKTI(Divine Power)."

" Nataraj literally means Lord of Divinty - Dances. As Shiva is dancing he is performing his act of Creation and Destruction."

" This is also known as the Dance of Bliss. In this image Shiva is standing on a dwarf that represents ignorance and illusion."

" Shiva is surrounded by flame and is also holding the flame of transformation in his left hand."

" Shiva's complete dance (and what he provides if you invoke him in prayer or mantra) encompasses the following elements:

"For the Gentleman, True Individual Beings, Aspirant, Devotee & Saints the Entire World is their "HOME i.e. Mandir, Majid, Girjaghar(Church), Guru Dwara & so forth."."

"All the human beings are the CITIZEN of World & CHILDREN of ONE CONSCIENTIOUSNESS i.e. ONLY ONE LORD."

"Therefore we bound to Create & Manifest HOMOLOGOUS Divine Energy of "ALMIGHTY CONSCIOUSNESS" to over come "THE GLOBAL WARMING."."

"If you stop doing Prayer, Japa & Sadhan then the LAMP will EXTINGUISH."

"If the INCLINATION towards Prayer, Japa & Sadhan is removed then the LAMP will be turned off."

"But if you takes LAMP in YOUR HAND & START moving ahead it will keep ILLUMINATING the PATH AHEAD."

"Once you reach the DESTINATION,the LAMP will AUTOMATICALLY be SET ASIDE."

"The BOUNDARIES of Castes,Nation,Languages,Cultures,and Civilization hold no meaning for them."

"Evolution of Life to GOD realization is the work of every one's Individual Efforts and is in fact the real EVOLUTION."

"THE True &Pure Knowledge OF "Divine Lord & HIS Divine Power. "

"Otherwise nobody can bind God in any definition,description or explanation."

"Its consciousness is homologous to every individual being of universe."

"The point here is that the image of Lord Being( God) is dependent upon the state of mind (Chitta (mind stuff,psyche) ) of the human being or the Aspirant-his Sentiments,Faith and Spiritual Path."

"There is living being who represents a small universe within himself (Human body & Universe is Homologous, (Yatha Pinde -Tatha Bramhande i.e. Vedanta Version)."

"This is called the individual level.The union of the whole(gross)and the conscious takes place within a person's body." 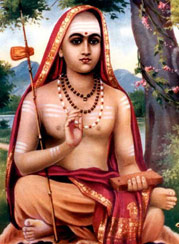 "For understanding the relationship of MANTRAS with the science of Yoga it is necessary to know the relation of the alphabet with them ."

"Sanstrit Mantras and names of God are therefore generally composed of such letters; for instance we have Om,Hari,Har,Ram,Shiva,Isha,Frim.Aeim(Aim),Shrim (Shreem),Hum etc."

According to the effect of sound all the vowels are mainly connected wit "IDA' nadi.Again ,short vowels pertain to "PINGALA' nadi.long pertain to IDA and four vowels 'ए E' Ai, O,Au to Sushumna."

"The nasal sound pertains to ATMA and Visargs to Shakti (divine Power)."

"Twenty five consonants from Ka to Ma are mainly coonected with Pingala nadi and nine semi- consonants and sibilants are connected with Sushumna."

"Nasal sounds (Anuswar) pertain to Atma and Visarega to Shakti."

"Prounnciation affects the motor nerves of tongue and acts on the sensory nerves of touch,throat,palate,node,upper teeth and lips and thus acts on the cerebellum,the hinder and lower parts of the brain near "AJNA CHAKRA",the seat of the most of the nrves of cranial system and as such falls under Fatha Yoga."

"Sound acts on the Auditory nerves and stikes the Auditory sensory centres in the Brain and as such ,falls under LAYA YOGA; whereas its meaning influences the Mind and such the Mind with Emotion of Love,Plesures <Peace and Devotion which forms the Branch of BHAVA YOGA or BHAKTI YOGA."

"In this way the God in master descends as Guru in the disciple.We have therfore a chain of Impersonal God:God as Shakti, God as Mantra,God as the particular Deity manifesting Himself in the heart of aspirant in a particular form (Murti),and God as Guru."

"Sanstrit Mantras and names of God are therefore generally composed of such letters; for instance we have Om,Hari,Har,Ram,Shiva,Isha,Hrim.Aiem(Aim),Shrim (Shreem),Hum etc."

"The Mantras for the attainment of Moksha (Liberation) end with Namah, Swaha(wife of fire also), Hum etc,'K' is also often added as in Shanker, Krishna, Kali Klim(Kleem), as it stands for "BRAHMAN-"K BRAHMA (LORD,GOD)".

"MANTRAS are also recited in order to attain such State."

"Evolution of Life to GOD realization is the work of every one's individual efforts and is in fact the real EVOLUTION."

"Prayer,Japa & Sadhan are like a LAMP in the HAND.As you keep moving forward the light will also keep moving FORWARD."

"If you stop doing Prayer,Japa & Sadhan then the LAMP will EXTINGUISH."

"If the INCLINATION towards Prayer,Japa & Sadhan is removed then the LAMP will be turned off."

"But if you takes LAMP in YOUR HAND & START moving ahead it will keep ILLUMINATING the PATH AHEAD."

"Once you reach the DESTINATION,the LAMP will AUTOMATICALLY be SET ASIDE."
THE DIVINE ADVAITA (non duality) "MANTRA" {One for all & All for One}."

"Every human being should be chanta this Mantra with their own feeling, emotion & FAITH and to destroy their accumulated Prarbdha-Karma (accumulated impressions), the following every day at the appointed time."

"The TREASURE of INFINITE Knowledge is within,a human beings has every limited INTELLECT."

"Just as solitude is necessary for "SPIRITUAL PRACTICES",so purification of CONDUCT is possible only through "SOCIAL INVOLVEMENT."

"Every step we take has a relationship to SOCIAL and EXTERNAL Codes of CONDUCT(Charity, Purity, Unity and Divinity), Religiosity & Spirituality."

"Self- Introspection " must also be embraced as indispensable part of SOCIAL CONDUCTIVITY, RELIGIOSITY,SPIRITUALITY."

"Be established within the self and burn down our defects through Social Conductivity,Religiosity & Spirituality."

"The Social Conduct ,Religiosity & Spirituality(selflessness) can be attained very easily on this EARTH,under this SKY,breathing the same air of UNIVERSE."

Email ThisBlogThis!Share to TwitterShare to FacebookShare to Pinterest
Labels: Dharma